Academic activities in all the six state-owned Colleges of Education in Oyo State have been grounded after workers in the institutions embarked on an indefinite strike.

Members of the academic and non-academic staff unions of the colleges had taken to the streets in their various communities on Friday, demanding that the government pay all outstanding arrears of salary owed them.

The unions are demanding the payment of eight to 15 months’ salary arrears and return of full subvention to the schools as none could stand on its own. 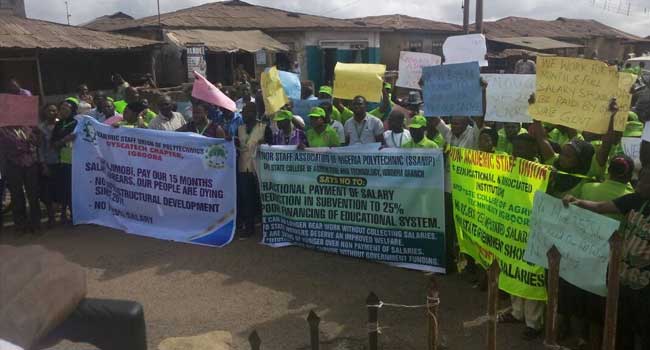 The chairman of the joint action committee for colleges of education in Oyo State, Afeez Adeniyi told journalists that the unions had started an indefinite strike, effective immediately Friday, November 3, and will not resume until their demands are met.

While the protests were ongoing, the Oyo State Government invited the heads of management of the six institutions and held a meeting with them behind closed doors. The meeting lasted till late last night.

After the meeting, the Commissioner For Education, Professor Adeniyi Olowofela, said the reduction in subvention for the institutions is an indication of current economic realities and was reduced after due consultation with management of the schools.

Prof. Olowofela added that governing boards would be set up for all the colleges of education with immediate effect in the bid to find a lasting solution to the issues at stake.