A married man identified simply as Lucky has been nabbed by residents of South Africa community in Abakpa, Enugu State after defiling a 13-year-old girl.

The minor identified as Godiya met Lucky after leaving her grandmother’s house who scolded her. The suspect who she asked for direction took her to a bush where he defiled her, gave her yoghurt and N2000 to keep the incident between them.

The act was uncovered after the victim’s grandmother launched a search for her. Facebook user, Leon Dag also revealed that Lucky impregnated a 15-year-old girl who gave birth two weeks ago. 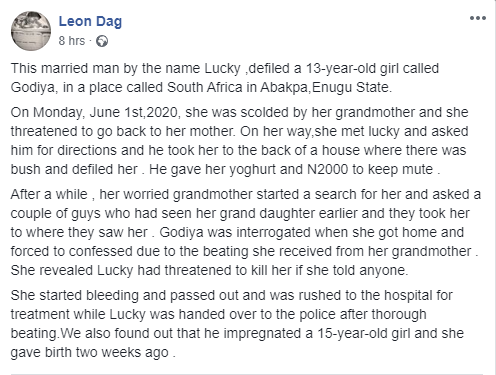