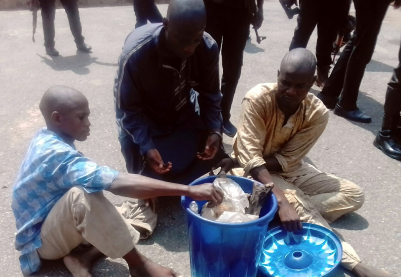 Three ritual killers have been paraded by the Oyo State Police Command.

The three young men, who were caught caught in possession of two fresh human heads and legs, informed the Police that their unbridled desires to get rich quick prompted them to get the human parts for money rituals.

The three young men informed the Police that their unbridled desires to get rich quick prompted them to get the human parts for money rituals. The state Commissioner of Police, Mr. Abiodun Odude, during the parade, said the suspects were arrested by the Special Anti-Robbery Squad of the Command on November 11, following a tip-off by a member of the public. Odude added that the suspects confessed to have severed the body parts from corpses at a Muslim cemetery in Isale General Area of Ogbomoso.

One of the suspects, Kareem, noted that this was his first attempt at using human parts for money rituals. The second suspect, Bello, said: “We went to Isale General at Ogbomoso to exhume the bodies at about 8p.m. On our way back, two inquisitive boys, who accosted us on the road, demanded to know where the offensive odour was from. “We tried to deceive them, but they were insistent. So we had to run. They caught Kareem before the Police arrested us at our homes.”

Asked what they intended to do with the human parts, Taofeek said: “We wanted to use the parts for money rituals. If we had succeeded in taking them to our place, we would have dried and burnt them. “After burning the parts, we will grind same to powdery substance and mix some of it with soap to take our bath in the morning and to take pap at night. After we have done this, some weird creatures, who we generally call spirits, will bring the money to us— usually at night.”

All of them, however, claimed it was the first time they would do such a thing. Asked how they got the knowledge of the ritual, they remained evasive in their responses.

REVEALED: How ‘One Million Boys Gang Leader, Ebila, Was Killed In Ibadan

FG Hands over National Theatre to Bankers’ Committee for Renovation