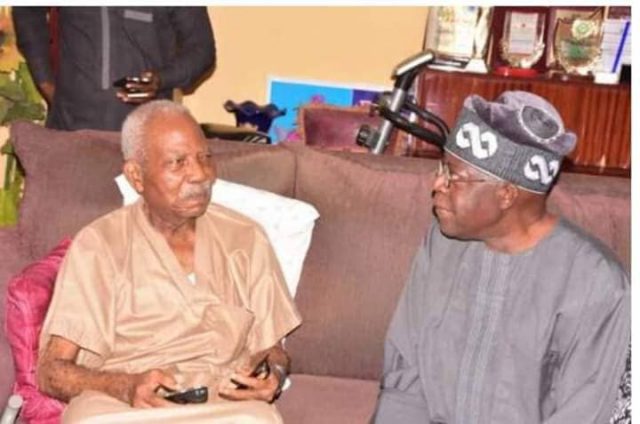 Asiwaju Tinubu speech presented by Governor Gboyega Oyetola at the public presentation of the autobiography of Baba Fasoranti- ‘My Life, My Legacy’ & Launch of Pet Project at the weekend in Akure, congratulated Pa Fasoranti for the milestone of turning 94 years old.

The APC leader commended Pa Fasoranti for his steadfastness and dedication to progressive and worthy causes and for his legacy of service to Nigeria and Yorubaland.

According to Asiwaju Tinubu’s speech, “In May this year when Papa turned 94, in my special tribute, while congratulating Papa for the milestone, I commended him for his steadfastness and dedication to progressive and worthy causes and for his legacy of service to Nigeria and Yorubaland.

“Today’s twin-event-the public presentation and formal launch of his autobiography and pet project is a fitting testament to that legacy.

“Papa and his life lessons have continued to serve as a moral guide to many of us and to the political class. Accomplished educationist, astute progressive politician, elder-statesman and die-hard Awoist, Papa has devoted his life to public service.

“We continue to celebrate him and his exemplary life. Indeed, what we celebrate about Papa is the success story of leadership by example, political consistency, total loyalty to the progressive cause, devotion to principle, integrity, the courage of conviction and uncommon contentment.

“It is on record that Papa eminently and excellently filled the vacuum left behind by our illustrious pathfinders and cherished leaders, and in post-Chief Abraham Adesanya era, Papa laboured tirelessly to build bridges of unity, accommodation, understanding, reconciliation and harmony in Yorubaland.

“I note with fondness that since Baba Fasoranti placed his hand on the plough in 1951, when he joined the defunct Action Group (AG) as an undergraduate student of the premier University of Ibadan, he has not been found wanting.

“Through thick and thin, he has remained a true democrat, a tested, trusted and productive worker in the progressive vineyard, a dependable ally of early leaders and a man of honour.

“As an accomplished teacher, school founder and administrator, Papa has contributed to human capacity development by moulding the lives of numerous youths who now occupy important positions in the socio-economic and political life of our country.

“As a distinguished grassroots player, Chief Fasoranti led the way in community service as Chairman of Akure Local Council. He also inspired, mobilised and supported like-minded patriots, including Omo-EkunWumiAdegbonmire, Alex Adedipe and other progressives just to mention a few in his bid to keep the banner of Awoist philosophy flying in Akure, Ondo State and Nigeria in general.

“In the Second Republic, Papa served meritoriously as a founding member and stalwart of the defunct Unity Party of Nigeria (UPN), led by the indomitable Chief Obafemi Awolowo, joining party leaders in planting party structures across the nooks and crannies of old Ondo State.

“Throughout his public service career, Papa served without blemish and scandal and made his mark as a shining example to people who aspired to selfless leadership. Having embraced a Spartan lifestyle, Papa has shunned covetousness, primitive accumulation and decried indiscipline in high places.

“As a public figure and private person, Papa has borne personal and political vicissitudes with sober reflection and philosophical calmness in a world that is full of ups and downs.

“As Afenifere leader, Pa Fasoranti effectively contributed to and enriched the discourse on regional integration, nation-building and good governance, and with a benefit of hindsight, advocated for a pure federal principle as the basis for peaceful co-existence in an indivisible and united Nigeria.

“Papa’s leadership role in the clarion clamour for true federalism, fiscal federalism and the separation of powers vis-à-vis federal and state relations had been very inspirational and exemplary.

“Indeed, some of us have been and remain die-hard advocates of true federalism. We have striven in and out of public office for its implementation as a sine-qua-non for a peaceful, progressive and united Nigeria.

“On this score, I remain unshakeable in my commitment to the idea and ideals of true federalism without which our nation’s unity would constantly be shaken.

“I enjoin us all to continue to hoist the flag of true federalism, which our founding fathers fought for in order to leave an enduring legacy for the future generation of Nigerians. That is the path to true nationhood.

“I congratulate Papa for taking this bold initiative and for going through the pains and rigour of documenting his life trajectory and legacies for posterity.

“I thank Baba, even more, for his pet project, the foundation, aimed at promoting a democratic institute that will inculcate and entrench desired political values and discipline in practising and aspiring democrats.”

My Heart Goes Out to all Victims of Lekki Shootings, Says...